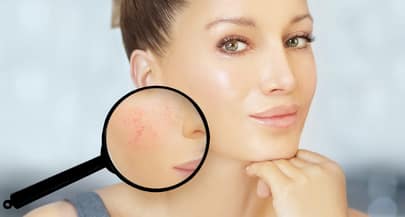 Rosacea is a skin condition that causes redness and flare-ups on the face. The disorder is most common in fair-skinned people of Northern European ancestry between 30 to 50 years old. Usually they have been exposed to considerable amounts of sun. Especially if over many years without protection from ultraviolet radiation. Rosacea is more prevalent in women than men. Rosacea can also run in families. Especially where there’s a genetic predisposition for the disorder. The Rosacea skin condition affects approximately 16 million people in the United States. Approximately 45% of patients with rosacea develop a resistance to orally administered medications.

Rosacea isn’t dangerous but it does cause redness of the face and minor swelling. Rosacea can make a person appear flushed, their nose red and/or flushed, or their face inflamed. Rosacea was before known as acne rosacea. It is no longer classified as acne because rosacea sufferers don’t always experience acne breakouts on the face. Rosacea flare-ups can be painful and cause embarrassment. Rosacea symptoms may include:

Rosacea is a long-term condition that gets worse over time if it isn’t treated. Rosacea causes damage to the skin through inflammation and sun exposure. Rosacea can be controlled with medications, laser treatments or light therapy.

Rosacea is known to have triggers. The disease can be triggered by many factors; such as diet, emotions and temperature changes.

Triggers for rosacea include:

Rosacea causes damage to the skin through inflammation especially with sun exposure.

Rosacea sufferers may find some relief by visiting a dermatologist. Or getting prescribed medication from a physician. Doctors may prescribe antibiotics. Often topical medications are used that suppress the inflammation caused by Rosacea. For more serious cases, a light therapy may be recommended to help calm Rosacea flare-ups.

There are many topical treatments available for Rosacea. Azelaic acid is a naturally derived medication. It is used to treat acne and Rosacea. It is very effective against papules, pustules (acne-like) and erythema (redness) of Rosacea. Azelaic acid helps to normalize the follicular keratinization. It also decreases microcomedone formation, which are believed to contribute toward Rosacea symptoms.

Brimonidine is a prescription gel that reduces chronic facial redness. This is one of the most common and persistent symptoms of rosacea. It does so by temporarily shrinking the blood vessels beneath the skin. The medication also reduces bumps and pustules that erupt as a result of rosacea. Brimonidine gel is applied once daily to the face before bedtime.

Topical metronidazole preparations (0.5%-1.0%) are effective treatments for rosacea. Metronidazole has anti-inflammatory properties, which can be prescribed as a cream or gel. It is also available as a 0.75% shampoo, which can reduce the symptoms of scalp seborrhoeic dermatitis and dandruff.

Topical ivermectin (Soolantra) may be used for the treatment of papulopustular rosacea. The medication is applied once daily for up to 16 weeks. Ivermectin is an anti-parasitic drug that is effective in rosacea treatment. It eliminates Demodex folliculorum mites that are sometimes found on the face. Rosacea treatment with oral doxycycline, tetracycline antibiotics, or minocycline are other possible courses of action.

Tetracycline is a Rosacea treatment that helps to unclog pores. It can also reduce Rosacea symptoms such as erythema, flushing and thickening of the skin. It also slows down the production of sebum which can lead to Rosacea symptoms such as acne rosacea, or acne-like breakouts. Tetracycline and its derivatives have historically been used for the treatment of papulopustular and ocular rosacea.

However, the only FDA-approved oral agent is modified-release doxycycline capsule, 40 mg (Oracea). Other oral Rosacea treatments including systemic and antibiotics, hormonal treatments may be prescribed.

Laser treatments are one of the best Rosacea treatments for reducing redness caused by Rosacea. Laser Genesis Treatment for Rosacea cost ranges between $300 – $1,000 depending on your skin condition. It is an excellent alternative to taking medications which could have side effects. Laser Genesis treatments offer Rosacea sufferers a safe, non-invasive treatment option for controlling symptoms.

IPL treatment for Rosacea is a laser-based therapy that is a non-invasive and safe treatment. Rosacea can cause redness, flaring, and acneiform eruptions on the face. IPL uses controlled light in specific wavelengths to alleviate the inflammation. It can reduce redness, pimples and uneven skin tones caused by the condition. IPL therapy is as a non-ablative treatment that uses filtered light.

The benefits of IPL treatments include:

Rosacea is a skin condition that can cause significant redness and acne-like inflammation of the face. Rosacea may be treated by using topical or oral medications. Other options include light therapy like IPL, or laser treatments like Laser Genesis. Laser treatments which few side side effects and are useful in Rosacea patients who wish to reduce symptoms or flares. Which of these methods would you try in order to find relief from your rosacea symptoms? If all of this sounds overwhelming and you want help with reducing your rosaceous symptoms contact our team today! We specialize in helping people like yourself identify their unique triggers. We can create an individualized plan for controlling your rosaceous outbreaks.